Another pensioner goes to jail 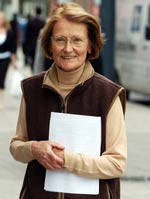 There is something distinctly sad and simulatneously ironic about the situation of the pensioner in Derby who has been sent to jail for not paying her Council tax.

Josephine Rooney, 69 has been refusing to pay her Council tax to Derby City Council now for some time on the grounds that her street has become a drug haven polluted by crack house and crime. Why pay Council tax if you're clearly not getting anything in return? As part of her campaign she runs a local residents group.

In a bizarre twist of irony the other week she received a "Taking a Stand" award from the government. They basically gave her £1000, which, interestingly, was just over the amount she owed in Council Tax. I know I'm horribly cyncical, but I can't help thinking she was given the award in the hope that she'd use the money to pay off the bill.
Posted by dizzy at 6/27/2006 03:08:00 pm

Cynical?....At least it makes a change from peerages!

I understand her fine has been paid by a well wisher. I'm pleased for her, she has made her point and stuck to her principles, she has guts.

Unfortunately the well meaning do-gooder has only succeeded in angering Ms Rooney. Do you think that the mysterious benefactor was a Labour Party activitist/supporter trying to prevent more bad press for the party?