Tesco to diversify into running jails. Every little helps? 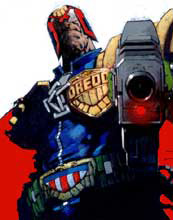 If ever anyone needs evidence of the straight out knee-jerk headline grabbing policy making of the Government, then John "not fit for purpose" Reid and the Home Office are a shining example. Splashed across the front page of this morning Times we hear that the lasting initiative - which has certainly done it's job in the headlines stakes - is that we're going to have secure cells in Tesco and shopping malls where shoplifters can be held for four hours of short-sharp shock therapy. Just for good measure they also want the police to carry mobile fingerprint scanners and take readings from anyone they think might have committed a crime.

Now clearly there are two primary objection here. The first, in relation to jails in shops is that you're basically engaging in summary justice for criminal offences and scraping habeus corpus. No longer will the court be available to you, instead you just have to hope the copper that you see didn't have an argument with their spouse that morning.

Of course, this does open the way for a wonderful thing called "bribery" in which the person nabbed innocently asks, as one would in say Uzbekistan, "is there some sort of fine I can pay instead officer?"

Added to this if the offender is merely the local drunk nicking his daily bottle of scotch, it's quite likely he'll appreciate the comfortable and warm surrounding of a secure prison cell for four hours where he can have a quiet kip without being disturbed by one of peers relieving himself next to his head.

The second objection is mildly less caustic. It's the age old concept of liberty and the presumption of innocence. I know liberty is an annoying concept for the authoritarian Left, but you know, to me it's kind of fundamental. If you have a scenario in place whereby the Police can simply stop anyone they choose on a hunch and then fingerprint them in the street without charge you're actually flipping the presumption on it's head. We're all guilty now.

The fingerprint stuff is disturbing.

I don't see the problem re in-store custody cells, though: just as if you were held in a custody cell in a police station, they'll be able to hold you for 24 hours and then charge you, get an extension from a magistrate, or let you go. Unless I'm missing something, all it does is to save on the journey from the shop to the nick...?

John, they are talking about four hours in cells in Tesco then they kick you out. Summary justice.

"Persons detained would be subject to detention to a maximum period of four hours to enable fingerprinting, photographing and DNA sampling... The aim would be to locate the short-term holding facility in busy areas to allow quick access and processing of suspects"

To me, that sounds very much like what they do now - 'processing of suspects' in this context is used to mean 'deciding whether to charge them, caution them or let them go'. I'd be interested in evidence to the contrary.

...Of course, this does open the way for a wonderful thing called "bribery" in which the person nabbed innocently asks, as one would in say Uzbekistan, "is there some sort of fine I can pay instead officer?"...

Terrifying. Next step: supermarket staff become the custody officers. All part of modernising the police force.