It's time for an elected second chamber 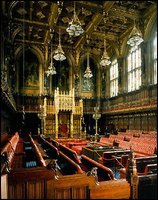 If ever there was a time to strongly argue for genuine House of Lords reform then today is surely that day? Rather than burying bad news, we ought to be using the daily revelations in the Loans for Peerages scandal to push for a lasting settlement to Blair's tinkering with the second chamber. A settlement that should form part of a much wider constitutional review and include proposals to resolve the West Lothain Question.

In 1997, Blair promised to reform the House of Lords by removing the hereditary peers. As is very well known, this was only ever part done with a deal for a certain number of hereditary peers (essentially the ones that actually did work) to remain and become life peers. Since then, the House of Lords has been defined solely as a chamber of patronage. It seems almost inconceivable that anyone could argue that a situation where entry to the second chamber is based on Prime Ministerial patronage is somehow more satisfactory then one based upon birth. The least worst option argument simply doesn't wash.

Those in favour of the second chamber being appointed have - it seems - a tendency to argue that if the House of Lords were elected then it would fundamentally undermine the supremacy of the Commons. The problem - as far as I can tell - is the Commons is not actually the supreme body, Parliament is. The Commons has no supremacy in a general sense. It does have statute supremacy in the Parlaiment Act which provides for the specific circumstances (i.e. forcing throiugh a manifesto commitment), but in the wider constitutional sense the Lords can still block the Commons anyway, it just tends not to because it's aware of it's own lack of democratic legitimacy.

In my view we should be looking at introducing something along the following lines:
The last of the above refers to the situation whereby - in it's current state - the Parliament Act could be used to overrule a demoractically representative House of Lords whilst not holding a share of the national vote over 50%. The Parliament Act should therefore be ammended so that it cannot be invoked where the party in Government in the Commons does not command an overall majority in the Lords, thus safeguarding against the "elective dictatorship".

Putting it simply, we should not be afriad of genuine bicameralism. It is good for democracy, and ultimately good for legislation.
Posted by dizzy at 7/13/2006 08:43:00 am

It's not the supremacy of the commons that I'm worried about in an elected second chamber - it's the the fact that elections for it would result in a majority government in both houses. I see the role of the Lords as a major check and balance. It's job is to scrutinise what the elected government does, and tell it if it is out of order, such as with the terrorism legislation. If this got elected, then this check on government would completely vanish, as Government whips would make sure of this.

For example, this government has more peers than the other parties, but no majority. It's role is like that of the supreme court in America. Life peerages prevent blowing with the prevailant political wind, as governments change, and each government appoints different sorts of peers. This means that generally, the Lords will in a perpetual hung state between the major parties. Having two elected chambers will, as you so rightly say, lead to a constitutional mess, but the only solution with two democratically elected chambers is to give them equal rights. It is my belief that one elected chamber will suffice. No-one says that the supreme court should be democratically elected. (at least, not in my hearing).

How would you grant the Lords titles when elected by PR? Lord whatsisname of the party list?

For the second chamber we would need a new electoral system, i.e. not FPTP, as they would not represent a consitiuency we could move towards some sort of list system and have a certain number appointed by an independent committe.

Now is it any wonder why Blair stopped halfway through his Lords reform!?

Oh no. Party list. The European elections have shown this to be a silly method. Giant constituencies and debatable drawing the line of who gets what seat.

Is that any better than the current system, as the way to get to the top of the party list is to have the ear of the party leader.

I'm not sure that would be a fact if the solution for it's copmposition was proportiionally based. You do make a good point about the disadvantage of the list system. But I think if the second chamber was proportional then the "nightmare scenario" would be very unlikely to ever happen.

Could they not represent counties, in a similar manner to the US Senate or the German Upper House?