An easy job at half the price 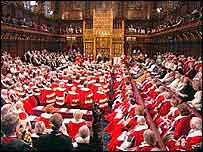 The full list of Lords lining themselves up for the £100k PA job of Speaker of the House of Lords has been published. The job is the ridiculously absurd "settlement" to the question about the the role of the Lord Chancellor which has been going on for a couple of years.

The job will involve exactly the same thing the Lord Chancellor had to do, i.e. sit on the Woolsack for 3 hours a day, the only difference is that they'll be paid for it at about £150 per hour (give or take a few quid), plus get some fo the Lord Chancellor's apartments and expenses. The speaker won't have any actual powers like the Speaker in the Commons though. It's basically a lot of money for sitting on one's arse.

One of the contenders, the Liberal Democrat Lord Redesdale, clearly understands the absurdity of the post, as he's pledged in his 75-word pitch that he would "do as little as possible in the chamber, apart from sitting on the Woolsack".
Posted by dizzy at 6/28/2006 09:01:00 am