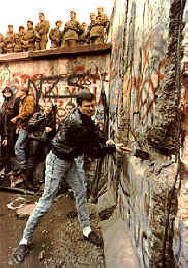 I just saw this post by Croydonian which commented on how Adam Ricktt's (in an interview with Iain Dale) said his first political memory was the Berlin Wall coming down. I have to confess that the bringing down of the Wall was also one of my first politically conscious memories (so significant in fact I have a piece of it at home).

Of course there are eariler political events which I remember seeing on the news, but they were only events. They weren't connected to a deeper political awareness.

I remember Brezhnev dying in 1982 and I remember Andropov popping his clogs two years later. I'll never forget a Spitting Image gag that showed them wheeling new Soviet leaders in on hospital trollies because of that. Obviously I remember the miners strike and the Falklands war as well.

I think my most vivid politically conscious memory was in 1991 when I was 16. I was in Budapest during the coup against Gorbachev. The sense of awareness, anticpation and genuine fear of the family I was staying with (and their friends) about what hardliners taking power in Moscow might mean for them again left a mark on me.
Posted by dizzy at 6/22/2006 02:32:00 pm

Hmm, in terms of understanding what was going on I suppose the '76 Presidentials might have been the first external event. Then again, I grew up in a very political household - I was out canvassing with my father from the age of six or so.

I think it's Rickitt, not Ricketts, isn't it? Rickets is a nasty disease. And nobody has credibly said that Adam causes knock knees, pain in the bones and difficulty getting up.

Sorry to be pedantic, but we mustn't gave the Socialists too many easy shots ...

fixed you pednatic sod! It's not my fault I can't spell. I done GCSEs.