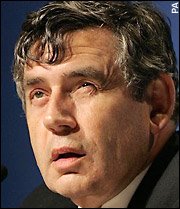 Back in April, Grodon Brown made much noise about how he was going to bring public sector spending per pupil in line with private sector levels. He said "investment in schools will rise from 5.6 billion today to reach 8 billions a year - a 50 per cent rise making a total of 34 billion new investment over five year"s."

Aside from the obvious Brownite disingenuity of stating the figures over five years to make them sound bigger, it transpired yesterday that this rise was actually only an "aspiration" - at least that is what the Permanent Sceretary to the DfES, David Bell, told the Education and Skills Committee.

In response to a report by the Committee which said "schools must be told not to expect dramatic increases to their budgets in the future,", David Bell said that ""The chancellor laid out an aspiration. The Treasury, properly, is considering, along with departments, a whole range of issues in advance of the comprehensive spending review. The government will have to weigh up its different pressures and priorities."

Don't forget schools now have swimming lessons to pay for too. Don't you think parents should be responsible for this?

Don't parents have to pay for that sort of thing anyway? I'm lucky, I'm a qualified swimming teacher anyway so I'll be teaching mine.