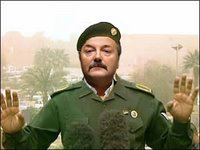 I just wanted to give a quick update about the Early Day Motion that I mentioned George Galloway was going to put down on Monday. The text of the EDM was just one sentence which stated, "That this House has no confidence in Sir Ian Blair as Commissioner of the Metropolitan Police."

Uptake to support Galloway has apparfently been massive. From what I've heard MPs have been climbing over each other to sign the EDM. Unfortunately the pen ran out though, so George's signature is a little lonely. Such a shame.
Posted by dizzy at 6/14/2006 10:18:00 pm