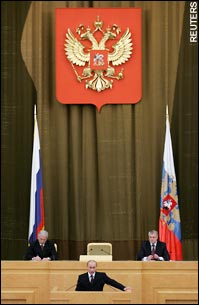 This story hasn't really gained much coverage today but yesterday Vladimir Putin, in the Russian equivalent of the State of the Union address stated very plainly that it was "premature to speak of the end of the arms race". He went on to argue that "it is going faster today" and is "rising to a new technological level". He also went on to portray the United States in the traditional role of Russia adversary and said the "stronger our military is, the less temptation there will be to exert such pressure on us."

Pretty strong stuff in my view. I realise that some might think me a little alarmist, but I do think that Russia is very much a forgotten country these days. Ever since the collapse of the Soviet Union people have taken Russia for granted. After all, it was facing massive change and progression toward democracy. It needed time to find itself and rise to the Western standards of statehood.

The problem is that hasn't actually happened. As I wrote a week or so ago, Russia has, under Valdimir Putin, created a strange hybrid system. A body politic that has merged rampant oligarchical capitalism with intense authoritarain soviet-style control. It's only natural that Putin (a former KGB man) would eventually start saying what he is saying (not to mention their position on Iran's nuclear ambitions). What is most suprising is the way Putin's address has seemed to measure so low on peoples' radars. We should be very aware that the Bear is still alive and it wants to start kicking again too.
Posted by dizzy at 5/11/2006 10:27:00 pm

Quite right. Putin is a major threat and it's high time our post Cold War love in was reviewed!