Propaganda posters on the tube 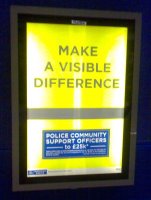 For anyone travelling in London these days it's dificult to miss the number of Government sponsored posters on the Tube (be they from Blair or Comrade Ken). There is one that particularly annoys me though. It advertises for Police Community Support Officers (PCSOs) with a slogan of "Make A Visible Difference". I think we should stress the word "visible" here. For that is all PCSOs actually are. A visible presence of someone dressed in police-like uniform walking around the streets. The powers available to PCSOs (laudable as the job is) are no more than an oridinary citizen. They're not warranted, they cannot arrest people with anymore legitimacy than a "citizens arrest" (ever tried making one of those?). You may indeed ask "what's the point then?", and thus we return to the poster's slogan.

The real worry though is that if we're going to openly promote that PCSOs are about creating the perception of police officers on the streets, rather than actually tackling crime, then we send a message to the criminal of "you can actually ignore these people, they're only here to stop everyone feeling nervous". It's not quite tough on crime, more tough on the perception of crime.
Posted by dizzy at 5/12/2006 08:25:00 am

In my local area the PCSOs just get terrorised by groups of young kids who chant "what you gonna do? You're not proper policemen! You cant even arrest me!"

Politics through the eyes of a teenager