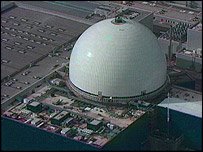 I'm a bit late to the party in passing comment on Blair's decision to openly state that the nuclear power option is "back on the agenda". Besides the fact that he's made his own Energy Review pointless by telling us his conclusions before it reports, I'm going to go out on a wing here and say I don't agree with using nuclear (sorry Gav but you're wrong).

Now I'm no greenie before anyone suggests it. I drive a 4x4 and I regularly use it to pop round the corner to the shops. The way Labour is addressing the growing energy problem is arse about face though. The problem is not energy usage and the need for renewables, the problem is the equivalent of signal attentuation on copper. We leak power from source to use. We leak it in a massive way. Something like 65% of power we produce is lost when it leaves the power stations and makes it way to the end consumer. If we tackle those kind of problem then there won't be an energy crisis.

That means increasing and promoting localised power generation by people. Local based solar power generation in communities, wind turbine usage at people's homes and even the return of home generators where fuel is delivered. The cost of nuclear power when offset against the gains would be an insane route to take in a country where we're already being taxed to the eyeballs. These reasons are beside the continuing question about handling nuclear waste after use. A recent report I believe concluded the best place for such waste is a big hole in the ground, a bit like asbestos but a lot worse.

The problem of energy over the coming years is certainly important, but it's the problems in the supply chain rather than problems in production that we ought to be addressing.
Posted by dizzy at 5/17/2006 06:32:00 am