Livingstone asks Londoners to bend over 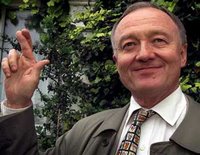 After two days of reflection I have now calmed down enough to write something about the London Mayor, Ken Livingstone. During the past week, Red Ken has made some commitments for his third term election bid.

First up, he says he'll increase the Congestion Charge to £10 a day. For some people that will literally cost them thousands a year as there are parts on the periphery of the zone where people don't actually live in it but due to one-way road systems are forced into it whether they like it or not. Interestingly this has occured significantly in the Kensington and Chelsea area, but it's not a tax on the rich honestly. For anyone reading who doesn't live in London, don't believe the hype about the Congestion Charge getting London moving. The parts that were gridlocked before it was introduced are still gridlocked. The Strand, The Barbican and Charing Cross Road don't need pedestrian crossings, you can just walk between the cars.

The second thing Ken has said he'll do is making Bus and Trams travel free for everyone under 18. Under 16s have already been given total freedom on the travel network (increasing vandalism and anti-social behaviour on buses) which resulted in price increases 2% above inflation even though Ken made a manifesto commitment not to raise the price. He's now saying that the prices are going to go up again.

London is now the most expensive capital to travel in the world, Ken wants to raise the prices even more and what do we get? Well, he's spending thousands on hosting a party for one dictator, Hugo Chavez, and he's recently travelled to China and compared the Tiananmen Square massacre to the Poll Tax riots.

How can anybody vote for this man. He constantly goes back on promises.

In June 2003, he stated in a radio interview that he would not extend the congestion charge zone. In 2006, he is now in the process of doubling the size of the zone. When he first took office he took the government to court to stop part-privitisation of the tube. As soon as the East London Line upgrade and extension is finished in 2009, he will sell it off private Train Operating Company.

This is just scratching the surface.

He is also on record as not liking Gordon Brown. So let's see how long that lasts in his quest to keep power.