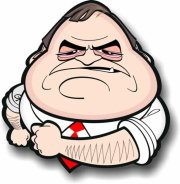 Iain Dale has blogged that Prescott will resign by the weekend because of his multiple love affairs with known and undisclosed woman (something about rosy cheeks in teh cold winter).

Personally I'm not sure about the prediction, a major resignation so soon before elections.. surely not? Unless they're planning ceremonial self-sacrifice or something as part of a wider strategy.

I've heard so many stories over the past few years about Prescott going. The last one I heard was that he was going to resign at the last election and have a Scot parachuted in and solve potential Westlothian issues.

Having said all that I've just reconsidered my view slightly. I guess if one of the red top Sundays was going to print something and Iain knows about it already then it might provide a reason for Prescott resigning.
Posted by dizzy at 4/27/2006 09:49:00 pm