ASA rules Blair is not Hitler 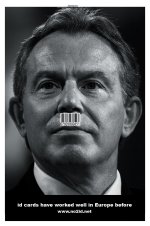 The Advertsing Standards Agency has ruled here that the No2ID campaign poster (pictured) did not constitue saying Blair was Hitler.

According to the ASA ruling the advert "had been intended to encourage discussion on a sensitive political issue" and that "it was unlikely to be seen as making a serious comparison between Tony Blair and Hitler but instead as highlighting a lobbying groups opinion that ID cards should not be introduced because of the threat to civil liberty they posed."

Even if it did say that, what of freedom of speech?