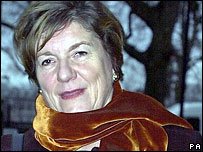 Ming Campbell has apparently sent a letter of "stinging rebuke" to Jenny Tonge over her remarks at a Lib Dem conference fringe meeting last month. As some may recall the LibDem peer said, "the pro-Israeli lobby has got its grips on the western world, its financial grips. I think they have probably got a certain grip on our party."

Campbell said in a press release that he "acted with the maximum powers at my disposal at this time. I have written to Baroness Tonge dissociating myself and the party from her deeply offensive remarks and what I believe to be their clear antisemitic connotations. I have asked for a review of the disciplinary powers available to the Liberal Democrat leaders in both the House of Lords and Commons."

Now, as Croydonian has pointed out this woman "has form" on antisemitism so it's high time someone called her on it. The question is will Campbell have the courage to withdraw the whip from her in the Lords?
Posted by dizzy at 10/14/2006 07:32:00 am

"The question is will Campbell have the courage to withdraw the whip from her in the Lords?"

Actually on that specific point, the question is does he have the power to do so under the Lib Dem constitution? It would appear that perhaps he doesn't. We've always appointed such nice untroublesome people to the Lords in the past...

The passage you quote is not remotely anti-semitic. It refers specifically to the influence of the "pro-Israel lobby". What she says about the baleful influence of this "lobby" is also clearly true.

Great work by the Lib Dems to have a constituion that cannot even get rid of its nutters. You would have thoughtt his would be an important point for a home to loons such as the Limp Dems.

Maybe they could pretend she has an alocohol problem instrad, seemed to work last time?

Politaholic - can't you spot the use of coded language? Even if it comes up and bites you? Who do you suppose the likes of the BNP, National Alliance etc etc have in mind when they refer to 'international bankers'? Those nice people in the Halifax adverts?

Croydonian, yeah thanks I think I can spot coded language. There was plenty of it in the last Conservative Manifesto (if you noticed). But one cannot reasonably dismiss all criticism of Israel or of the pro-Israel lobby as coded anti-semitism. That is an all too common bullying tactic designed to silence criticism.