Where next for Short? 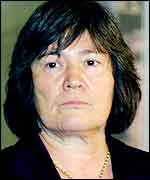 The news yesterday that Clare Short would (probably) not stand at the next election was all over the papers last night. It wasn't stepping down that was the matter of discussion per se but more her comments about how she wanted a hung parliament that grabbed the headlines.

According to reports she's now facing potential expulsion from the Labour party for speaking out as she did. Thus creating an annoying independent brummie MP rather than an annoying Labour brummie MP.

I'm not quite sure whether the former is particularly significant, but the latter probably is. The current General Secretary is Peter Watt, and from what I've heard he's quite the Blairite and probably the man behind the "Wolfgang" Blacklist that Iain Dale blogged about earlier this month. She doesn't stand a chance really, but where will she go next I wonder? TV? God help us if she does.
Posted by dizzy at 9/15/2006 08:38:00 am