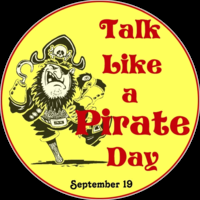 Ahoy me hearties! There are many strange Internet phenomona out there. At the same time as the Internet brings a mass of information sources ever closer to the masses, it a can also be used to promote ideas that are deliberately silly. The subject of this post is such a phenomonon.

You see, tomorrow is International Talk Like A Pirate Day. Invented in 1995 by two americans, John Baur and Mark Summers, they picked September 19th (the birthday of Summers' ex-wife) as the day when everyone in the world should talk like a pirate.

Wouldn't it be great if Charlie Kennedy spoke like a pirate tomorrow in his speech? People might actually take them seriously if they did.
Posted by dizzy at 9/18/2006 10:31:00 am


BTW, is that man in the Graphic Charles Kennedy?