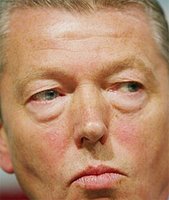 Has Alan Johnson's Internet leadership campaign kicked off? And is it being run by David Taylor of Keeping the Faith fame? A quick look on the Whois database shows that the following domains have all been registered by Taylor in the last week:

Currently they all have holding pages. Bloggerheads has quite a dossier on David Taylor the arch-Blairite.

Update: Anyone visiting the sites now get's redirected to Senator Johnson's site. This is a stitch up though and me, being a real Internet geek can prove it to you.

David Taylor has put a re-direction rule onto the Domain hosting server.

"217.22.89.179" is owned by Moving Edge based in Brighton. "156.33.195.33" is owned by the US government and hosted in... the US. Each of the www.jophnson4leader domains linked above resolve to a hosting page belong to a web company from Brighton. Each domain in DNS was regsitered by David Taylor on September 5th. Each domain's records are hosted on the same nameservers in the UK (ns1.domainmonster.com, ns2.domainmonster.com, ns3.domainmonster.com). The US Government does not host domain records on tinpot hosting companies. In fact you cannot even read .gov domain records on the Internet.

The fact that such a redirection has so suddenly been put in, and the fact that they've redirected to the US government, plus the claim that a .co.uk and org.uk have been registered last week on behalf of some obscure US Senator is nonsense.

Someone is clearly panicking.

Update 2: I'm sorry if I make people feel thick. I could spend days talking about DNS and domain names. I used to be a Hostmaster. David Taylor, or whoever it is, picked the wrong person to mess with.

Update 3: I just phoned David Taylor, he sounded unbelievably harrassed as if he's had a lot of phone calls already. When I asked him why he's gone for a simplistic hack to try and mask the reality of the domains he hung up on me.

However, maybe it is for the mighty Boris, or the deservedly obscure Diana .

Good post. You probably screwed up their plan and at least cost them a couple of quid in registration costs. Nice one. That'll learn 'em.

How has he messed up their plan?

Well hating to be a party-pooper, but try any of these four www's and you get Sen. Tim Johnson's ugly mug...

But why would a U.S. Senator want .org.uk or .co.uk domain names? Mr. Taylor is just using Tim Johnson as cover.

Stupid blighter has made it a bigger story now, hasn't he?

sometimes I feel really thick,this is one of them.

Good one Dizzy - let's hope the media pick up on this one... I have already sent one email (linking to you of course) to a hack.

Not a particulary flattering site for the leader-in-waiting.

More amusingly, he also appears to be the Labour Party official who arranged for the ejection of Walter Wolfgang at last year's Labour Conference.

That's what I like about you Dizzy, you never take no for an answer. Great Scoop!

Croydonian...you're right, Taylor has created this story into being more than it should have been.

The spin machine just isn't as good as it used to be.

What we have here is known as Watergate syndrome - the cover up is more damaging than the original story. Given that Taylor appears to have form as a cyber squatter of sorts - gordonbrown.org is or was available to a higher bidder - he could have left the Johnson sites alone and claimed he was just chasing an honest buck. He can't do that now.

Johnson should have stuck to what he knows best - snail mail.

I wonder how Senator Johnson feels about being used (abused) as a cover for the deceit of a wannabee British Prime Minister.

Great sleuthing. It helps to have a cyber brain that won't take no for an answer.

and so for Taylor to receive bad press because of his activity is very much deserved.

Brilliant stuff Dizzy. Has this hit the MSM yet? Have you had any job offers yet?

Nice Post on this blog try any of these four www's and you get Sen. Tim Johnson's ugly mug Blackpool Hotels

Hmmm did you read the thread?