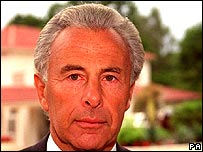 Apparently, he then received a phone call directly from Lord Levy telling him that he did not need to disclose the loan. Gulam Noon then called the civil servant at Dowing Street who he gave his forms to, Richard Roscoe, got his forms back and re-submitted them without mentioning the money. Dodgy huh?

It now seems very likely, and logical, that the selling of peerages during this government will - along with Home Office disasters, failed IT projects, and questionable foreign policy mistakes - form a significant part of their history rather than just a by-line in the ever growing catalogue of sleaze.

I imagine Blair has been mulling over the significance of Lord Levy's naming overnight. The initial reaction from Labour has been the not unexpected line thay the "matters are subject to an ongoing police investigation and therefore we have nothing to say." Don't expect that official line to change, but do expect some briefings over the day saying things like "state funding for political parties", "everyone was doing it guv", and possibly even "this shows our internal corruption regulations work".

The real question is whether Inspector Knacker will be knocking on Downing Street's door soon as well. It's inconceivable that Blair didn't know about the phone calls and resubmitted forms, and under whose orders was Lord Levy acting? When history judges Blair I expect along with comparisons between him and Gladstone (due to his predilection for mixing moral crusades with foreign policy), there will now also be comparisons made between him and Lloyd George, with Lord Levy the bit part playing Maundy Gregory.

Of course, I say all this, but Telfon Tony has a habit of getting away with things. We'll probably see some headline grabbing initiatives over the next week in attempt to bury the story, and the sad thing is, many of the mainstream media political hacks will buy it.
Posted by dizzy at 7/11/2006 06:34:00 am