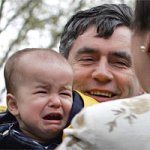 A few weeks ago I wondered who Gordon Brown would appoint to the MPC. Yesterday, following criticism of the appointment process by MPs and the Bank of England Governor, Mervyn King, Brown finally announced the names of the two economists who will join the committee that sets the UK interest rate. The first is a professor at the LSE called Timothy Besley, and the second is the chief economist at British Airways, Andrew Sentance. They will not however join the committee formerly until the autumn.

So who are these two and will they change the balance of the MPC? It's fair to say that Timothy Besley is an unknown quantity. His academic work gives no real indication of how he may vote, however, Andrew Sentance appears to be a different matter. Unlike his recently passed predecessor, David Watson, Sentance appears to be a be an advocate of interest rate cuts.

In recent months Watson had been arguing for a rise in rates. At the same time the new man Sentance, as member of the Times "shadow MPC", had voted for a rate cut in both March and April. It seems therefore - by implication at least - the MPC is about to become slightly more "dovish" toward rate rises.

We shouldn't really be surprised with this though as it undoubtedly suits Brown. Having a rate-cutting MPC in place instead a rate-rising one, means that should Brown call a snap election he'll have something to shout about at the hustings.
Posted by dizzy at 7/14/2006 10:34:00 pm

Umm - I'm not sure where you get the idea that Mr Sentence "appears to be an advocate of rate cuts".

In the July meeting of the Shadow MPC, he voted for no change and said the folloowing:

"Interest rates may need to rise at some point, but not yet. The latest GDP figures show that the main drivers of growth at present are exports, investment and government spending,"

No mention of rate cuts there at all.

Tories may not grasp this - but the decision to cut, hold or raise is made on a month by month basis, based on the data at hand. Your claim that his decision in April is more indicative of what he will do in August than his decision in July is just false.

I think these conspiracy theories about rate cuts in conjunction with elections say more about Tory thinking than it does about the actual workings of the MPC.

I note that Mr Sentence was one of the "seven wise men" advising Ken Clarke when he was Chancellor - and advised him to put interest rates up in the 18 months leading up to the 1997 election, which Clarke ignored, prefering to risk letting inflation grow, in his attempt to buy that election. That's Tories for you - only don't project these practices onto Labour.

Conspiracy theories? Don't be so melodramatic. It's not just Tories that are saying this appointment signals a new balance to the MPC. Even the Independent's business pages suggest that the MPC is more likely to cut than rise rates on the basis of these appointments. I'd hardly call the Indy a Tory paper.