Israel has found itself engaged in military conflict on two fronts, fighting Hamas in the Gaza Strip and now drawen back in Lebanon fighting Iranian-backed Hizbollah. After the kidnapping of an Israeli solider a few weeks ago provoked incursions into Gaza, Israel was further provoked into reacting to Lebanon after Hizbollah backed militant captured more Israeli solders. A naval blockade has been placed on Lebanon by Israel, and there is talk of bombing to sever the main road to Syria. 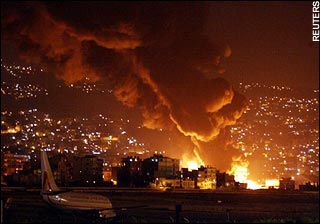 Perhaps I'm being overly conspiratorial, but I have this strange feeling that there is a much wider view to these latest development. It's well known that Israel will not hesitate to react when it feels threatens or see attacks on it's military. For Lebanon and Hizbollah to enter the fray makes me wonder if there is direction coming from Iran and/or Syria in some way (be it top political direction, or simply lower down jihadi's).

No doubt the usual suspects will roll out from the Left, completely miss the point, and tell us it's all Israel's fault and if they just withdrew to 1948 borders everyone would have a big group hug and live in peace and harmony again.
Posted by dizzy at 7/14/2006 07:33:00 am

Teheran and Damascus have always been the hands in the respective glove puppets of Hizbollah and Islamic Jihad.

It seems to me to be more than just about the kidnapping of the Israeli soldiers, in that Israel is re-asserting itself in the area, and possibly punishing the people of Palestine for voting for Hamas.