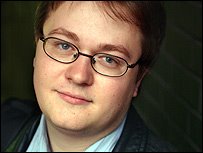 It appears Johann Hari (right) has decided to attack Niall Ferguson (below). With the usual emotive nonsense that is a constant theme in his inconsistent work he begins by saying Ferguson is a "court historian for the American hard right" (no he isn't, most of them hate him because he keeps telling them the US is an empire), and then proceeds to state that Ferguson is an "apologist for mass death".

The reason he say's this is because Ferguson - quite rightly - has taken the view that the default assumption that everything the British Empire ever did was bad might actually be invalid. He doesn't excuse morally wrong acts by the British, far from it. In fact, if you read Ferguson in his totality (which I doubt Hari has), you find that he's anything but scathing about when the British Empire clearly crossed unacceptable moral lines. An indication that Hari hasn't bothered reading Ferguson comes when talking about Rwanda. Hari says,

"It was not the people of Rwanda who officially divided their country into Hutus and Tutsis, and invented race myths asserting the inherent supremacy of the Tutsis – a process that placed a genocidal time-bomb under that society. No, it was the Belgian imperial masters who wanted to divide and rule."

Had Hari actually read Ferguson he would be aware that the Belgium Empire is very strongly attacked by Ferguson for it's actions in Central Africa. What Ferguson does then do is place it in context with the likes of Livingstone during the same period. The idea that Ferguson is an "apologist for mass death" is absurd if you actually take the time to read him (and more importantly, understand him).
Posted by dizzy at 6/14/2006 01:59:00 pm

Niall Ferguson is far too dangerous for the left, in much the same way that Lomborg is.

He tears apart their stupid arguments with logic, something the left all too often lacks completely.

Like you say, he has either not read him or he is too blinded by the Doctrine Of Anti-imperialism to be able to understand. On the USA, his core argument is that they would be better off to admit that they are an empire, something not too far from waht leftists like Hari say.

Didn't Niall Ferguson back John Kerry in the 2004 election? Some court historian.

I'm not sure if he ever supported Kerry outright, but he certainly argued that it might not be a bad thing if Kerry won.