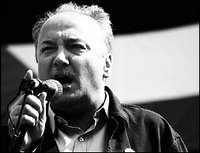 George Galloway is planning on putting down a motion in Parliament today calling on Sir Ian Blair to resign. Beside being surprised Galloway actually knows where Parliament is, he's only doing it to jump on the bandwagon and preempt the report about the shooting of an innocent Brazillian by the police.

Personally I don't think that the Met should lose the top man at such a time of heightened tension. The claim that Galloway and others on the Left make about the population's loss of confidence in the police may sound good, but you can bet that next time something happens to do with counter-terrorism the reel off the same arguments. The default position of people like Galloway is that the police are in the wrong anyway.

At least we now know why Galloway chastised his Respect colleague for saying muslims should not cooperate with Police last week. He's obviously been planning this motion for a while and knew that what credibility he might have would be screwed if he agreed with her. Does he really think that "shoot to kill" will not be the policy if Sir Ian Blair goes? Changing the man at the top won't make a difference to the way the police handle potential threats like suicude bombers. You can bet Galloway would be the first to complain about police incompetence if they chose not to shoot someone who consequently blew themselves up.
Posted by dizzy at 6/12/2006 06:31:00 am