Sleaze Watchdog punished for speaking out? 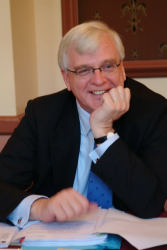 Yesterday, the Sunday Times carried an interview with Sir Alistair Graham, the chairman of the Committee on Standards in Public Life. In the interview, Graham savaged Blair's "judgement" in not maintaining proper standards in the public life.

Given I'm advertising the Little Red Book it won't be surprising that I agree with Sir Alistair's analysis of Blair's government.

"Opinion polls [show] the public think this government is as sleazy as the last. He [Blair] has paid a heavy price for ignoring standards... We suspect he is pretty lukewarm to the work we do"

Blair's lukewarm feelings to the Committee may well be showing through if the West End Final edition of the Evening Standard is to be believed. It suggests that the Watchdog is about to suffer significant funding cuts.

Hmm, he is being punished for trying to do him job whereas people like prescott are rewarded for not doing their job.