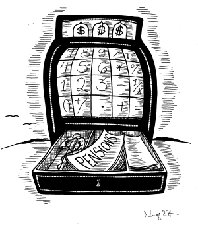 So I've been out all day in the sun doing stuff for the local elections, I've finally got online and saw that the good Mr Dale has posted a quote from PMQs where it appears Blair may have told a porky. I know.. Blair telling a porky? Whatever next!

Anyhow, when asked about the extent of New Labour acievement he apparently said that the achievement also included:

As Iain points out, they;ve done nothing of the sort and that is a Tory policy. Still, he's been in the job a long time so I guess he can calim repsonisbility for making the mistake and stay on and ensure that it doesn't happen again!

NOTE: At some point during the maddess of tomorrow I will check that quote in Hansard just to be sure (not that I mistrust Iain of course
Posted by dizzy at 5/03/2006 08:38:00 pm

I checked Hansard this morning on my "Weekly Round Up of Parliamentary Nonsense". The exchange went as follows:

The Prime Minister: As the People's Liberation Front would say, there is doubled maternity pay and doubled maternity leave. There is extra child benefit as well. There is, of course, the case that we have spent more on pensioners than we would have done if we had relinked the basic state pension with earnings, and many other things. I can recommend to my hon. Friend the excellent booklet published by the Union of Shop, Distributive and Allied Workers on 300 Labour achievements.
"

Makes me sick but I can't pin this on him. Bugger