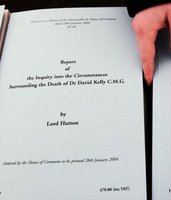 I actually read this little gem of a story in the Evening Standard last week. At the time I planned to blog it but then my 1 year old son distracted me. Thankfully Iain Dale picked it up from the Mail on Sunday.

The story is a classic bit of New Labour sleaze. Last week, Cherie Blair and Alistair Campbell autographed a copy of the Hutton Report and then auctioned it at a Labour fundraiser. The Hutton Report for those that don't remember (shame on you!) was the report investigating the tragic suicide of Dr David Kelly (a government's weapons expert). For Blair and Campbell to autograph a copy of the report and then auction it is a pretty spectacular piece of insensitivity towards the Kelly family, and quite frankly, is rather disgusting. Talk about rubbing salt in the wounds.

Apparently BBC news has picked the story up today (on the screen not the website(yet)) so it may roll a bit further than before. It's certainly a brilliant example of the remoteness and sheer arrogance of the "comfy sofa" circle of friends in Downing Street.

Update: It appears that Tory MP, Stewart Jackson, has put down an Early Day Motion demanding a public apology
Posted by dizzy at 5/23/2006 10:35:00 am