Blair applies for Secretary General of the United Nations 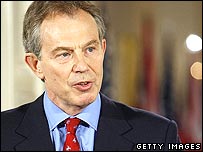 In a speech at Georgetown University today, Tony Blair put forward the case for a New Labour administration at the UN - or more accurately - him. If there was anything quite so obvious as a job application for Secretary General of the UN then I'll be buggered if I can tell you what it might be.

He basically stood there and did a bit of classic Blair. He pinned his "reformer" badge on the wall and said how the UN ought to be. You could almost hear D-bloody-Ream playing in the background. It was like they changed something in the Matrix.

It's fair to say that - scandals aside - I don't think Blair's political ambitions are by any means over. Like his predecessor Major he's already said he won't go to the Lords, and unlike Major I don't think he will take up a prominent position in the Carlyle Group. However I would be surprised if he doesn't try to represent their interests wherever he may end up. Todays speech indicated (to me at least) the direction he is looking in.

For anyone who might be wondering, I do actually agree with his view that the UN needs to be reformed so it is more responsive to international crises, however the jury is still out on his "solutions".
Posted by dizzy at 5/27/2006 12:01:00 am

Blair for UN president? That'd get my vote. He has sway with the Americans, a commitment to Gladstonian interventionism and a high profile in much of the world. What more could you want?

There no such thing as UN President and nor is there a voting system. As for the final questions, there is much more one could want. A man free of corruption allegations and sleazy financial incidents for a start.