Don't hold your breath on health and safety madness ending

Here's the funny thing about "elf' and safety", half the time the stories are not because of legislation that deems the mundane a risk but rather over-zealous Council officers and pathetically scared facilities managers worrying about a vexatious lawsuit to the point that common sense doesn't just leave the room but actually runs up a mountain, finds a cave and refuses to come out until someone checks that the grass verges it needs to walk on have been freshly cut lest they cause it to have a terrible bout of hay fever.

I mention this because, apparently, we're going to have a massive shake up of the Health and Safety laws so that common sense can come out if it's little cave hideaway where it's shacking up with Bin Laden safe in the knowledge that it won't start sneezing or trip up on a rock that someone forgot to put a bloody great warning sign around.

The thing is, the reaction to this by the Oppositon is thoroughly predictable. Expect Labour MPs, Left wing commentators, and the leftie bloggers too start listing lots of statistics about work place injury, and subtle hints that what is going to happen is a return to pre-war industrial death on a massive scale. There may very well be a desire to let common sense reign once more, but there will still be many who will wince and murmur "better to be safe than sorry" and bemoan our inevitable return to Victorian hardship. 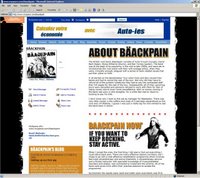 What will, of course, be ignored by the moaners will be that even the Health and Safety Executive itself agrees that the manner in which H&S operates has becomes an absolute joke. Not because there are laws that ban conkers at school, but rather that all the tales you hear happen because the people that enforce them at grass roots or in private business don;t understand what is and what is not necessary.

Saying this though, there is undoubtedly scope for the HSE to be heavily culled, especially it's insanely expensive advertising campaign budget.

For example, and long time readers of the blog might remember this, the HSE spent £2.1 million on a campaign that saw them create a fake rock band and auction a spandex outfit on ebay all to raise awareness of back pain. Honestly, they really did spend that much on this. Hilariously the HSE did once concede that most of the time health and safety generates useless paperwork, yet they insist on wasting money telling hairdressers to wear gloves.

A review upon the application of health and safety should really be welcomed, but unless it comes with wholesale reform of what the Health and Safety Executive spends its money and time doing, along with some legal reform to restrict the absurd work that many ambulance chasing lawyers get involved with, I doubt very much will change and the Daily Mail and others will continue to catalogue how common sense is still up in its cave in Bora Bora.
Posted by dizzy at 6/14/2010 07:05:00 am